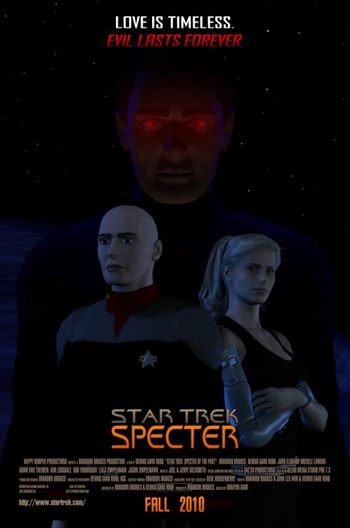 "Time is not on your side."
"Each of us, at some point in our lives, will face a challenge that will force us to confront the very essence of who we are. How we meet those challenges is what defines us."
— Captain Gaius Reyf
Advertisement:

A popular Star Trek fan film set in 2378, being released primarily as a series of Webisodes on YouTube. A leading Starfleet scientist suddenly goes off the deep end, faking his own death to go into hiding. Then, five years later, he returns, meaner and more dangerous than ever. The newly commissioned USS F Scott Fitzgerald scrambles to decipher his plan, only to learn that he's constructed his own fully-equipped starship, a female android who's almost perfect, and even has an Elaborate Underground Base.

Setting out to track the scientist down, Captain Gaius Reyf learns that the culprit is none other than his oldest friend, Dr. Braiyon Garr, who's amassed fourteen of the most advanced machines developed by The Federation, and with them could tear space apart. Reyf follows Garr through an elaborate Jigsaw Plot, discovering in the process that his old friend is willing to go to any length—including using human lives as pawns—to accomplish his goal.

Believing that to be his only problem, Reyf discovers early on that the reappearance of his old friend is stirring up some uncomfortable emotions concerning their history, guilt and remorse that threaten the success of the mission in ways his relative inexperience never could. When they finally meet face to face, Garr offers Reyf a Deal with the Devil to travel into his own past, and Set Right What Once Was Wrong.

Considered one of the best works of Star Trek fanon currently in production, the film is notable for its accurate CGI replicas of the classic TNG and VOY shooting sets, as well as the creative use of kitbashed versions of the Enterprise-D and the USS Voyager. The film introduces a new crew of enterprising young men, heavily implied to be an Expy of the TNG crew (up to and including Captain Reyf's Bald of Awesome, a trait shared by Jean-Luc Picard).

Tropes seen in Specter include: