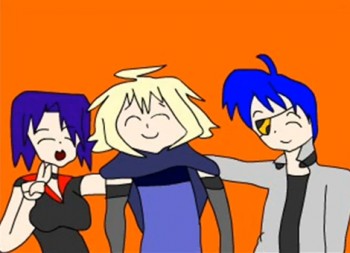 L to R: Raine, Nero, and Abel. They fight Evil Rulers!
This is a story that takes place in the Land of Laizen. In this Land, people are ruled by a government of Four people, known as the Evil Rulers. Being forced to live under the guidelines and rules of these Evil Rulers, the people are apparently oppressed, and cannot live an easygoing lifestyle. However, one town has decided to rise up, and stop this oppression...
— Plot summary from the official website
Advertisement:

Quest of Laizen (or "Quest") is a YouTube-hosted Fanime series by Anthony W.H., started in the fall of 2011. Chosen by fate, Nero, Raine, and her brother, Nero's best friend Abel set out to defeat the Evil Rulers and save Laizen from apparent oppression.

It was uploaded to Youtube and Nico Nico, where it was met with mixed reactions of horror and amusement. To quote the author "The quality itself is not striving to be good or enticing, but is relying on its cheap production values to create a feel of 'this is so terrible, it's actually pretty entertaining!'"

The series ran for thirteen episodes. It can be watched on the series channel

, or on English Nico Nico

Tropes that Quest Of Laizen provides an example of: