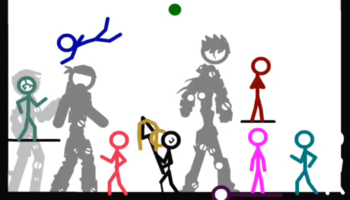 The main core of the series (and it's predecessor) revolves on various colored stick figures going through a Death Course, trying to reach an exit alive and/or further the plot. Viewers are able to choose a color they think will reach the end/survive.

The first arc had the stick figures try to stop Blue - who planned to gather two Power Spheres to revive Light Blue after the latter got into a scuffle with the others.

Despite the others best efforts, Blue managed to get hold of both the Red and Blue spheres - and they were never mentioned again until 4.5 as in NSDM 0, Viridian the bigger bad was in play.

After a group led by Navy Blue rescued Brown from Viridian's clutches, Brown gets captured and breaks free again after Yellow infiltrates and rescues the sectors prisoners, then gets re-captured alongside Yellow.

Navy Blue headed off to fight Viridian himself, but failed and only angered Viridian. As another group of rag-tag stick figures advance, one of Viridian's pawns, Black, does a Heel–Face Turn once he re-learns of his origins.

Teal faces-off with Viridian, now really corrupted, as the others get closer to the main room where the Green Sphere is held. The resulting battle gets a few bystanders caught up in it, as Fuchsia tricks Black and kills him, carrying his body and Copper's to the Green Sphere's room for an unknown purpose.

The battle finally ends with Viridian dead, but the Green Sphere missing. Dark Blue, after deciding to check for anyone left alive, encounters Teal in the former Green Sphere room.

At this point, the creator has stopped the present timeline to work on other past stories, like 4.5, which explains what happened to the first arc villain Blue.

Has spawned a number of copycats, a notable one including Willimation's