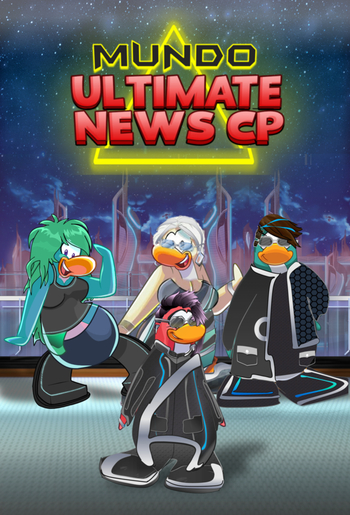 Triangle-light from Universaal mythology. Order and symmetry is above all.

Mundo Ultimate News Cp is a web series created by Henrique Martins. It's considered a fanfiction of the Club Penguin franchise, although much of its plot is completely original, thanks to the series' multiverse.

The web series especially differs from the delicacy of children's games that fanfic is based on, and is aimed at over 15 years old, by the presence of serious issues, political discussions, sex scenes and explicit violence.

It is hosted on the YouTube, having its first episode released on January 9, 2018. But before that, certain characters like Zackylinn, Zackeline and Craziverse have existed since 2015, by the same creator, on the facebook page of Ultimate News Cp.

, currently in Portuguese and Spanish.

The story of the series takes place in multiverse No. 15775. In addition to the traditional parallel universes based on Club Penguin games, there is also an older, real-life inspired sister universe, however, as it is older, the city of Icetown located in Earth is in the year 2090. Where many things have happened since the beginning of the new world order, and pinguinity is testing the most advanced intelligent and environmentally sustainable city ever made.

Meanwhile in the universes of Club Penguin, the powerful book Island Codex in Club Penguin Island has the secrets of its creation revealed. This timeless book is part of a plan to connect the entire timeline of Club Penguin's derived universes.

* False Utopia: Icetown's bad side mostly stems from actions that the political opposition did in the city after 2085. However, the obsession for utopia to work took much of citizens' freedom of expression, making them live in obscurantism until they were 21 and join the Underground Workstation, where they will have access to unlimited knowledge for the rest of their lives, or not at all?examples:
Feedback