Web Animation / Mr. Incredible gets blasted by a JDAM missile 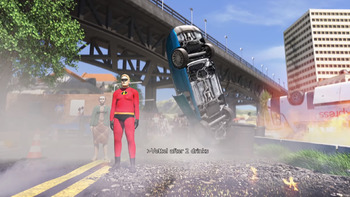 no
Mr. Incredible gets blasted by a JDAM missile

is a short CGI parody of The Incredibles created by Podel

, which follows the exploits of the German-born Bob and his superhero alter-ego Mr Incredible: "The ultimate Dutch superhero".
Advertisement:

Following his termination from his office job from spiking his bosses' coffee with Radium, Mr. Incredible takes it upon himself to destroy an "idiot robot" that is tearing through the city for cigarettes to steal, in an animated sequence whose quality can be best described as "... both professional-level and dogshit at the same time".

This work contains examples of...