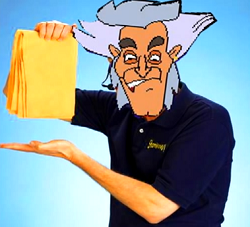 I.M. Meen Gets a Job is a series of YouTube Poops made by rossw79. It focuses on the adventures of Ignatius Mortimer Meen after he loses his evil labyrinth and his library, the infamous front for his labyrinth, is closed. So far, it has 57 episodes.