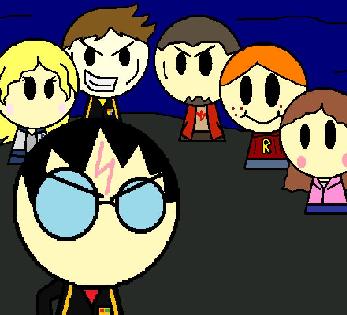 Harry: "Why do so many people die in this school?"
Dumbledore: "Well, the giant squid has to eat SOMETHING!"
Advertisement:

that parodies Harry Potter by using cartoon characters with legless, triangular bodies, drawn in MS Paint and animated with Windows Movie Maker. The series pokes fun at the Harry Potter franchise while also adding in a hefty dose of surreal humor and Black Comedy. Five of the seven books/eight movies have been parodied, which are Harry Potty and the Satanic Stone, the Chamber Pot of Secrets, the Prisoner of Azcatraz, the Goblet of Fireants, and the Fellowship of the Phoenix.

Despite episodes being regularly uploaded for several years, it eventually became an Orphaned Series midway through Fellowship of the Phoenix, as the creators have moved on to other things.

The videos used to be viewable here

. However, since then they've all been set to private, meaning they can only be viewed if thebandragoness gives you an invite. A few months after this, though, thebandragoness began uploading new cuts of the episodes that attempt to remove as many unfunny jokes as possible.