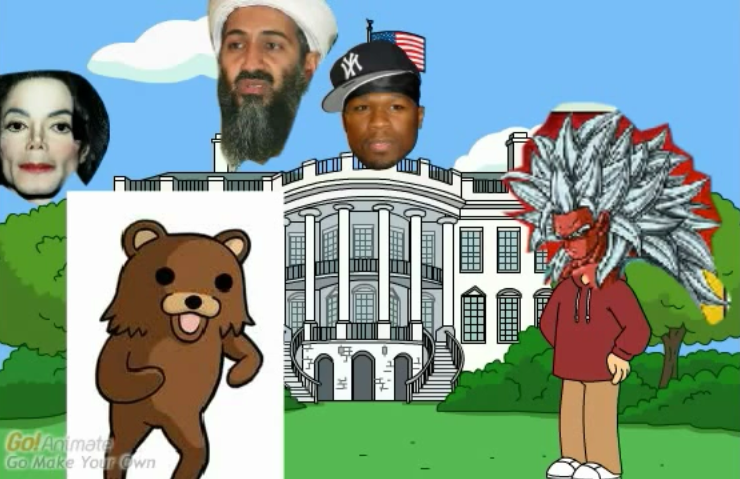 Our Hero,who turns into himself with a head of the concept art of Super Saiyan 5 Goku, fighting against Pedobear, and the heads of music artists, and Osama bin Laden. Outside the White House, of all places. No seriously, this is Crack Fic at its finest.

Dragon Ball WTH?! is a parody mini-series,so to speak, animated in GoAnimate by the Youtube user Iceboys121

, creator of the GoAnimate series: Shorties, Every H8 Harry, Comedy Fails, and Epic War of Japan.

It's your usual typical Dragon Ball Fan Fic. Only it's on crack. Really REALLY on crack. So much so it's hard to tell either if it's a So Bad, It's Good parody or just flat out insane, and that even the creator of the videos doesn't know what's going on. And it's In Name Only, that it has nothing to do with Dragon Ball nor Dragon Ball Z despite a few things.

Basically, it follows Brian, a generic-looking Marty Stu character who has the unexplained abilities of turning into a Super Saiyan 5, cutting off peoples' heads, and some other powers that show up the moment the "plot" goes along. Along the way, he fights against Weegee, whose ultimate form is The Pedobear, the heads of Michael Jackson and 50 Cent, a supposed Evil Former Friend that looks just like him, only sporting a green shirt and headband, and a Big Bad who goes by the name Serial Killer, who manages to kill him by having the moon crush him., while getting help from King Kai, despite the fact that he did nothing to help, and some nerdy kid named "that guy" who has similar powers, who originally want to kill him for not trusting him about seeing him "fight" Serial Killer, before joining him after going Super Saiyan 4.

We're not making this up. Seriously. It's only 4 episodes so far at least. Three for the "The Weegee Saga", and only one for "Dis Guy Saga".

If you want proof that this exists, please visit this playlist that has all 4 episodes, so you can watch it while you still can (and probably laugh at how ''somewhat'' bad this is)

Needs Wiki Magic, please. Seriously, give it some Wiki Magic. And also give Iceboys121

's other works some Wiki Magic too if you want.

The war continues so go away.