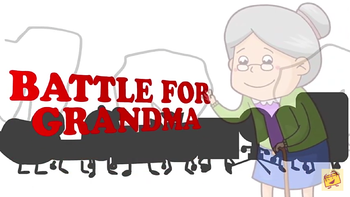 Don't mess with Grandma
Battle for Grandma (BFG for short) is a joke object show made by SacriStuff.
Advertisement:

One fine day, a grandma decides to host an object show. But this isn't just your average grandma, she is an omnipresent being with terrifying powers that you'll never want to mess with. The eleven contestants have no choice but to compete in her game where they would be disintegrated into atoms upon elimination while the last one standing would be crowned the winner and gets the most fabulous prize of all...Grandma (Sounds fair if you asked).

Episodes can be found in this playlist

A season 2 has been announced.

Following tropes for this show includes: