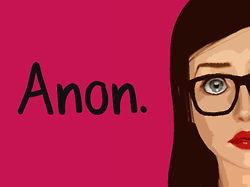 She's Chelsea, and this is her blog.
Advertisement:

), being the central main story from all the miniseries from the autor (somehow all the other short series are connected to Anon from any side).

The plot follows Chelsea Clark, an ordinary socially awkward girl, who has a crush on the cute football star from her school Kyle Weston. We follow her as she tells to the audience all her week through her blog, signed as "Anon". All starts to get more interesting when Tucker Martinez, the rebelious hot guy, appears.

Anon contains examples of these tropes: