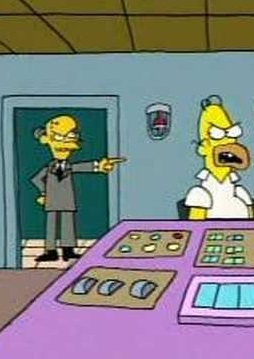 "Angry Dad, you're fired!"
"That's opinion, NOT NEWS!"
— Angry Dad, after reading the newspaper's insulting headline about him
Advertisement:

Angry Dad is a series of Internet cartoons based on the amateur comic of Springfield independent comic book artist Bart Simpson. The animated version, presented by Simpson's Bartoon company (in association with Ay Carumba Entertainment), debuted on BetterThanTV.com in the early 2000s. It became a landmark Internet sensation, at one point in 2002 becoming the Internet's number-one non-pornographic website (according to hearsay). Simpson's own father, Homer, provided the inspiration for Angry Dad, with the character's popularity among his fellow students spurring the development of the web series. Although its production site fell victim to the collapse of the dot-com bubble, the Angry Dad shorts remained a popular hit.

These cartoons highlight Angry Dad's daily life. In one particularly notable feature, he becomes infuriated with the local newspaper insulting him, resulting in his eyes exploding. Another portrays his workplace, a simulation of the Springfield Nuclear Power Plant, where Angry Dad unwittingly detonates the cooling towers. Even at the dinner table, Angry Dad finds that trying to get ketchup out of a glass bottle results in disaster.

The character briefly saw a resurgence in 2011 when Simpson produced an Academy Award-winning short film based on the Angry Dad cartoons. By then, Simpson described the web cartoon as "semi-autobiographical" because his father legally forced him to say "semi".