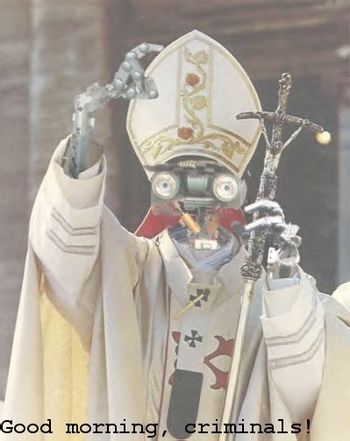 Actually, Sentience is the Pope.
Everything from the top to "Sentience is a homunculus" was copied from the Marina wiki. Because here, it's easier to link people to awesome pages in the text.
Sentience is a devout Catholic.
Think about it: Sentience believes everyone is very guilty, but no one is incapable of achieving redemption. You're still a guilty criminal no matter what, but you can strive for something greater than your base nature. This also explains the prevention and demonization of sex, notoriously prudish as Catholics are, and Sentience doesn't want the scum of society being fruitful and multiplying.

There are no confessionals (maybe that was the kiosk's original purpose...?), but a lot of Catholic churches aren't strict about its members attending confession in the current times. Your big confession comes when you accept your sinful nature and begin to walk the path of atonement. Though there aren't any churches, there are a lot of political figures, who have traditionally been both valuable tools of spreading religion and being terribly corrupt. The asylum also has a very alarming number of witches.

Sentience doesn't force anyone into a particular belief system. This falls within its recent policy of condemning specific actions, but being tolerant of other belief systems, preferring to win new followers using gentle, loving persuasion... but with the ever-present threat of damnation and suffering. The old generations, however, were rigidly and harshly converted, possibly by way of inquisition.

Plus, Sentience occasionally arrests people based on the seven deadly sins. And to quote Kay, "Sentience was conspicuously eager to offer to bring in religious figures if Xanxus wanted Mass held or anything..."

Agatha created Sentience and the asylum.
Technological prodigy Agatha was bored one day and wanted entertainment. She programmed Sentience and gave it the task of arresting wrongdoers from every corner of The Multiverse, inserting herself into the asylum as a fellow inmate, and made Sentience believe it was programmed by someone else. Not content to simply observe, though, Agatha began wreaking havoc amongst the inmates. This is the reason she was able to elude Sentience for so long, and even hide her lifesigns from him.

Was her capture part of her plan, or a turn of events she failed to predict? Only time will tell...

Where does Sentience get the blood rations?
Possible theories were had before she revealed that they were obtained from universes where humans are constantly spilling blood in close-quarter combat. These theories included:
Sentience is a homunculus.
A homunculus is an artificial human, and Sentience is an artificial intelligence including (at least to an anthrocentric mind) human emotions and feelings. One could consider it to be an artificial human (and thus homunculus) from this. Furthermore, in Fullmetal Alchemist, all of the homunculi (not counting Father and the creepy doll monsters) are named after the Seven Deadly Sins (Envy, Pride, Wrath, Lust, Gluttony, Sloth, and Greed). In the Book of Genesis, one might interpret the first humans as gaining consciousness or sentience from the Forbidden Fruit which grows from the Tree of Knowledge. Some religious figures might consider this gaining of consciousness to be The Deadly Sin (original sin, etc., etc.), thus placing Sentience as the 0th Deadly Sin, the one from which humanity cannot escape.
The Engineers are Time Lords.
How else would they have the technology to kidnap people from every universe and time period ever?

The Engineers represent the Holy Trinity.
There are three of them, right?