Visual Novel / Yin, Yes or No 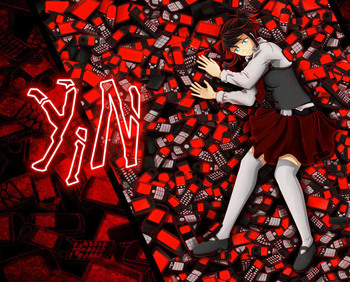 An entire room of cellphones is the least strangest thing she's seen today.
"I haven't killed anyone!"
Advertisement:

Yin Hakyō wakes up to find herself tied to a death-chair. An authoritative voice declares that she's been charged with murder. She protests her innocence, but her pleas go unheard. When she next opens her eyes, she finds herself inside a floating prison cell. All around her is pitch black even though the tall lamp in her cell is on. Another voice introduces himself as Keith McInnes. He tells Yin that the place they're in is called the Void, and that her presence here indicates she's not nearly as innocent as she claims.

Unwilling to accept her fate, Yin manages to convince the judge overseeing her case to let her collect evidence that proves she doesn't belong here. Unfortunately for Yin, the judge plays by their own rules, and Yin's quest isn't as straight forward as she'd like it to be...

is a 2014 horror-mystery Visual Novel by Mirrowdothack, created using the Ren'py Engine. The game is split into five chapters, with each of the first three ending in a trail. During these chapters, you have to search the environment to pick up evidence and solve puzzles in order to progress through the plot.* Think 999 crossed with Ace Attorney. The last two chapters are mostly story based with some dialogue options that will determine which ending you get.