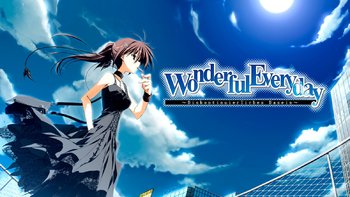 Wonderful Everyday, known in Japan as Subarashiki Hibi: Furenzoku Sonzai (Japanese: 素晴らしき日々 ～不連続存在～, "Wonderful Everyday: Discontinuous Existence") and sometimes abbreviated on the internet as "SubaHibi", is a Japanese adult visual novel developed and published by Kero Q. It was released on March 26, 2010 for Microsoft Windows. It was released in English in August of 2017.It is widely regarded to be a great, if strange, Visual Novel.

Subarashiki Hibi contains six stories, the titles of which are taken from chapters in Alice's Adventures in Wonderland and Through the Looking Glass. Most of the stories take place in the fictional Suginomiya neighborhood of Tokyo and recount the month of July 2012 from different perspectives.

Many of the tropes in this work count as spoilers, ESPECIALLY if you haven't finished reading the first chapter. Proceed with caution.