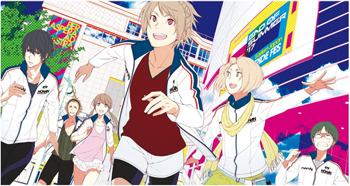 Hokkaido schoolgirl Nana Sakurai becomes moved after watching a stride (a fictional version of Le Parkour with relay elements) video on the Internet, so much that she decides to move to Tokyo and enroll as a freshman in the school of the two boys in the video: Honan Academy, and become the Stride Club's manager. Once there, she discovers the Stride Club is not in its best moments after their two aces quit and they had to merge with the Shogi Club to avoid disbandment. However, after Nana joins along with two of her classmates (the energetic Riku Yagami and the serious Takeru Fujiwara) the Honan Stride Club decides to pursue competitions again, facing their long time rival, Saisei High School, whose Stride Club members double as members of the idol group Galaxy Standard.
Advertisement: