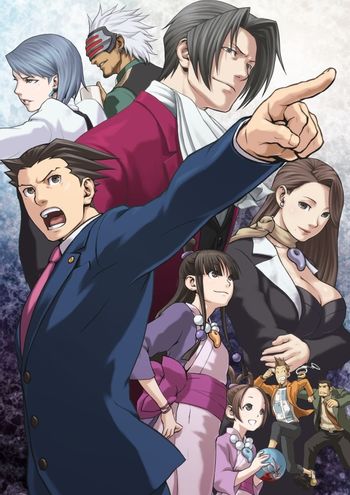 Behold the Power of Attorney!
"Why did I become a lawyer in the first place...? Because someone has to look out for the people who have no one on their side."
— Phoenix Wright, "Turnabout Sisters"

The first three games in the Ace Attorney series star Phoenix Wright, a sympathetic, easily flustered Perry Mason-type with Anime Hair, who digs deeper into the mysteries surrounding his clients' cases (which always seem to involve murder), butts heads with a host of eccentric characters, discovers clues and evidence the police miss, and uses those clues in court to force the truth out of witnesses and discover the true perpetrators. He fights alongside his late mentor, Mia Fey, and her Genki Girl sister Maya Fey. They were originally developed for the Game Boy Advance, with the exception of the fifth case of the first game, "Rise From the Ashes", which was created for the Nintendo DS remake, known as Gyakuten Saiban: Yomigaeru Gyakuten (Turnabout Trial: The Revived Turnabout) in Japan. The game plays out in a Visual Novel style through the perspective of Phoenix Wright during investigation sessions, where the player can talk to other characters, present evidence, and find clues to build up their case. Usually the next day, court begins, where the player cross-examines witnesses to find contradictions, eventually forcing the real culprit to confess. The bonus 5th case of the first game took advantage of the touch-screen and mic on the DS allowing for more in-depth investigations on evidence, which is used in later titles in the series that require a system with a touchscreen.

The eponymous first game of the series chronicles Phoenix's first cases, Mia's death, and Phoenix's first battles with prosecutor Miles Edgeworth and his abhorrent tactics, culminating in a fierce face-off with Edgeworth's mentor, the legendary Manfred von Karma. The aforementioned extra case, Rise From the Ashes, ties the plot with the second series together. In 2010, it gained a U.S. iOS port

. A live-action movie directed by Takashi Miike was released in theaters in Japan in February 2012 based mainly on the events of the second and fourth cases of the game. An anime adaptation began on April 2, 2016 that focuses on the first two games of the series, with a second season in 2018 adapting the third.

The second game, Phoenix Wright: Ace Attorney – Justice for All, introduces von Karma's prodigal daughter, Franziska von Karma, out for revenge after the events of the first game. Phoenix must defend an array of new and wacky clients, including chronically unlucky cop Maggey Byrde and famous yet dim TV star Matt Engarde. The game features a new element known as Psyche-Locks, where the player is able to break characters' metaphorical "locks" that enshroud secrets that they hide. The game also replaces the five-strike system for a virtual health bar where the amount of health lost varies based on the seriousness of the error the player makes. Plus, the player can present profiles in addition to evidence. Near the end, the game also highlights the nature of the relationship between Phoenix and Edgeworth. (No, not like that...)

The third game, Phoenix Wright: Ace Attorney – Trials and Tribulations, excitingly culminates the series by further exploring the background of Mia, Maya, and Phoenix by way of the mysterious coffee-guzzling prosecutor Godot. The Kurain Channeling Technique, which was given less attention in the previous games, becomes the focus of the entire plot as the entire series ties together for an epic climax. The game also features two flashback cases where the player character is Mia, while Phoenix is a mere college student dating the sweet and demure Dahlia Hawthorne. And, for a portion of the last case, Miles Edgeworth steps into Phoenix's shoes.

The games were originally released for Game Boy Advance, and then ported to Nintendo DS and Japanese PC. DS versions were then ported to the Wii as downloadable titles on WiiWare, featuring a modified, Wii-specific control scheme that permits the use of hand gestures with the remote. A further Updated Re-release featuring all three games was released for iOS and Android in February 2012 Japan and May 30, 2013 in all other regions, targeted primarily at the iPad and replacing the pixel art in the GBA and DS games with scanned versions of the original character drawings (entitled Gyakuten Saiban 123 HD in Japan and Phoenix Wright; Ace Attorney Trilogy HD in English). Another compilation of the three games for the Nintendo 3DS (featuring the crisper sprites from the iOS version with improved animations and corrected music as well as some mild 3D effects) was released in Japan April 17, 2014, in NTSC countries December 9th, 2014, and in PAL countries December 11th, 2014 (entitled Gyakuten Saiban 123: Naruhodou Selection in Japan and Phoenix Wright: Ace Attorney Trilogy in English). The compilation was released for non-Nintendo consoles for the first time in 2019, as it made its way to the Nintendo Switch, PlayStation 4, Xbox One, and PC (this time worldwide) via Steam.

All three games provide examples of: 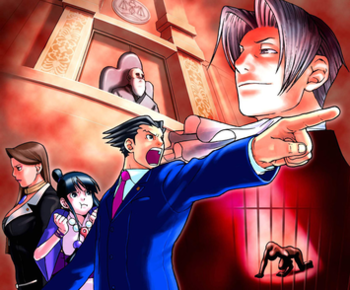 Phoenix Wright: Ace Attorney – Justice for All provides examples of: 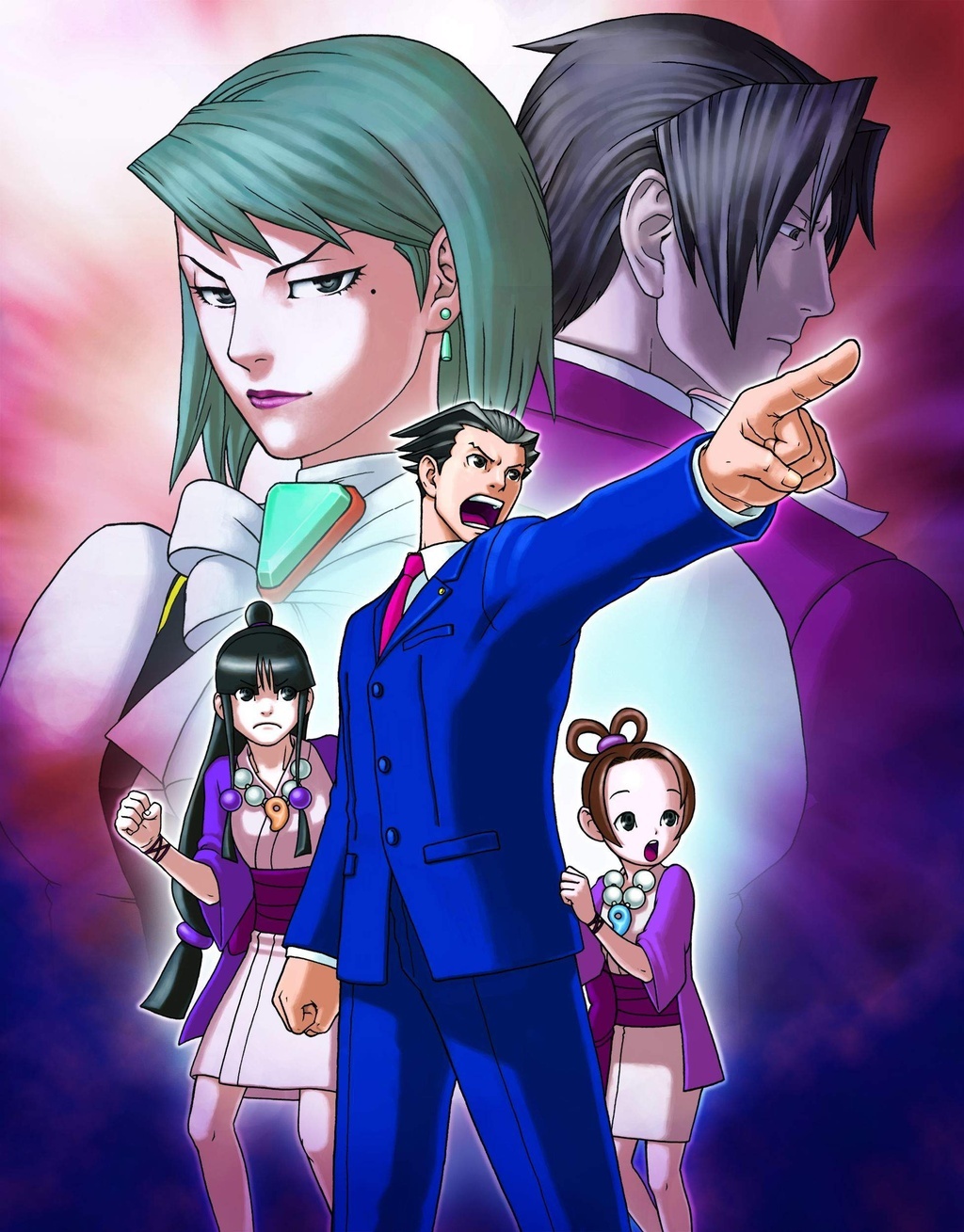 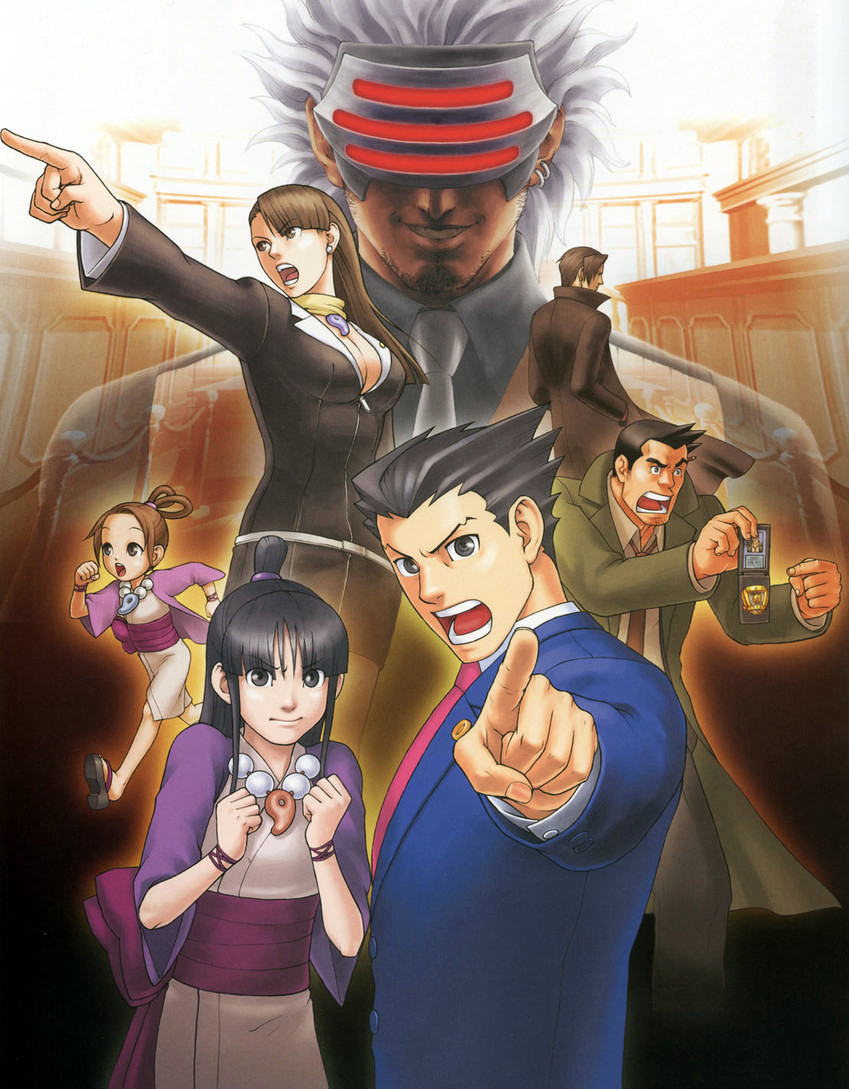