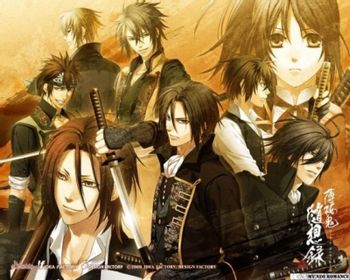 "At the end of an era, the men of the Shinsengumi struggle to uphold the samurai ideal. When a young girl is thrust into their midst, she finds herself irrevocably tied to their tragic fate."
Advertisement:

In Kyoto, Japan, near the end of the Edo period, a young boy is being chased through the streets at night by a pair of revolutionaries loyal to the Emperor. Hiding in an alley, the boy is horrified to witness his pursuers' brutal murder at the hands of demonic looking men with glowing red eyes, who laugh maniacally as they hack their victims to pieces. When the fiends turn their attention to the boy, his life is only spared by the timely appearance of two samurai belonging to a group of powerful warriors loyal to the Shogun, known as The Shinsengumi. Unsure just where the boy's loyalties lie, the Shinsengumi take him into custody and return him to their headquarters.

The next day, they are "shocked" to discover that the "boy" being held prisoner is, in fact, a girl named Chizuru Yukimura. Chizuru came to Kyoto in search of her missing father, an accomplished doctor of western medicine who she suddenly lost contact with several months ago. When the Shinsengumi reveal that they too have been in search of Dr. Yukimura in relation to the strange attacks that have been plaguing the city, they allow Chizuru to remain under their care and assist with the search. Agreeing to continue living as a boy so as not to distract the men who serve her new benefactors, Chizuru quickly becomes acclimated to their lifestyle and grows to genuinely care for each of them.

Her life soon becomes anything but peaceful, as the Shinsengumi's enemies seek to overthrow the Shogun and those loyal to him at any cost. At the same time, both the numbers and ferocity of the crazed men that Chizuru's protectors cryptically refer to as "failed soldiers" continue to increase. In the midst of one of the most chaotic eras in Kyoto's history, Chizuru grows determined to do everything she can to protect the lives of her new comrades.

Hakuōki (often romanized as Hakuouki or Hakuoki) is a popular video game franchise developed by Otomate, Idea Factory, and originally released in Japan in 2008. The series comprises eight different games: two main titles and a fan-disc first released on the PlayStation 2, two spinoffs, and three handheld gaiden games. Most of the games have been ported to multiple platforms (namely: PlayStation Portable, PlayStation 3, Nintendo DS and Nintendo 3DS).

The visual novels have been adapted into an anime series by Studio DEEN and licensed for release in English by Sentai Filmworks in American and Canada, MVM Entertainment

in the UK and Hanabee Entertainment in Australia and New Zealand.

2021 saw to the announcement of a ten-episode Live Action television series on Japan's WOWOW Prime streaming service, with Tsubasa Sakiyama as Hijikata.

The Games
The Anime