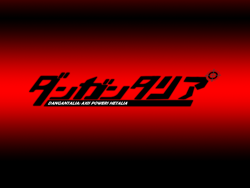 Welcome to the life of mutual killing.

Dangantalia, or its full title, Dangantalia: The Despairing Countries, is a fanmade Axis Powers Hetalia game, based on Danganronpa.

It begins when the Nations receive a mysterious invitation written in crayon. However, when they were locked in, a mysterious voice came out telling them that the only way to get out is to kill someone in the group. Realizing that there's no way for a Nation to die, they were at least a little relaxed.

However, their belief was crushed when a Nation "died" suddenly...

The first part of the game can be downloaded here

WARNING: Since the story does revolve around murder and mystery, spoilers run rampant here.