DDLC Purist Mod is a Game Mod for Doki Doki Literature Club! and is designed to be played only after the official game has been completed. As such, the mod and this page both contain spoilers for the official game. 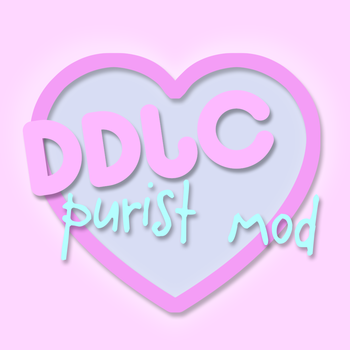 "I don't know what you intend to do, but... I really want you to be happy."
"What do you mean, make things right? Do you... really think it's even possible? I told you already: there's no happiness to be found in the Literature Club. You'd be doing so much, all for nothing. It might make you a little happy for a short while... But nothing will change.

...and I know it will hurt a lot when you realize that."
— Monika

Set after the events of the main game, the player returns to Monika and states their intent to make things right. Begrudgingly, Monika agrees to cooperate with the player's plans this time, and the game begins anew. The game unfolds exactly as the original did until the end of the first act, at which point the plot diverges from the original and the game proceeds down a new path depending upon the player's choices.

With several hours of additional content, DDLC Purist Mod gives each girl a full-length route with at least one good and one bad ending, with heavy focus on the development of the relationships between the main character and the girls, and the problems each of the girls face. Developed beginning in September 2017 by a team of 16 people, the mod was officially released on August 24th, 2018. The mod features several new pieces of original artwork and over 60 minutes of original soundtrack.

The mod is available for download on Google Drive here