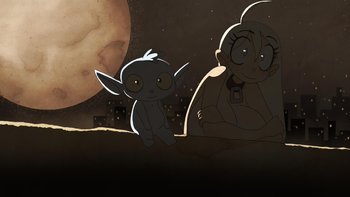 Gremlin Dave and Bella, in a rare moment of happiness. And also of no naughty bits showing.

Bella the Barbarian Barmaid is a nudity-filled, "Hyborian Age" comedy by Rapscallion Games, the creators of The Miskatonic. Originally, the story was still in development, with frequent progress updates seen through the official Twitter and Patreon pages. However, due to intervening circumstances, the project's final release is currently on hold.

In the city of Zundin, which is the capital of the fantastic land of U'qai, there is no force more prevalent than capitalism. Professional fishing is commercialized entertainment (referred to as "livestreaming"), floating eyes are used to collect personalized data for advertising, and the dregs of society are given ethereal body modification to better perform menial labor.

One such dreg is Bella Beufal, a Barmaid at the Nether Soon bar and death cult, who had her chest enhanced because physical attractiveness is a key part of customer service. However, Bella is not content living an impoverished life with no chance of ever improving her station; she's a radical leftist, and all she needs is a big enough following to bring down the corrupt in charge. Or at least to afford a bed not made of rocks.