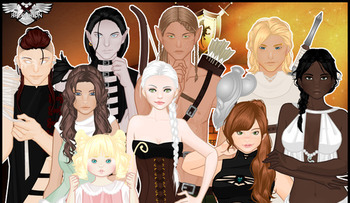 From left to right: Kole, Sky, Seena, Zander, Aida, Faelern, Tillie, Jace, and Kyra.
Ascension is a free visual novel made by Rinmaru Games. The story takes place in a world called Arunia that is populated with 7 different races. The main protagonist, Aida, and her best friend of six years, Sky, are investigating what Sky's mother's journals hold when they encounter some new friends and a 23 year old secret.
Advertisement:

A manga adaptation was drawn by PrinceOfRedRoses

In 2018, Rinmaru briefly removed the games and the manga from the internet due to harassing messages she had been receiving from younger fans. She also dropped the fourth chapter she was working on, "Echoes in the Dark", and has no plans to continue any development on the series. The games were reinstated on RinmaruGames However Due to the shut down of Adobe Flash, they will only be available until 2020, but the manga is slated to be a Patreon exclusive. You can read about this on the ImpQueen blog

Not to be confused with Ascension (Miniseries).

The full series can be played at Rinmaru's main site, RinmaruGames.com