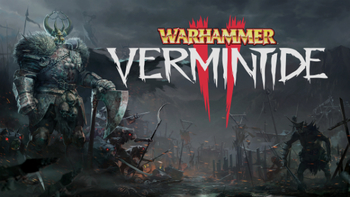 Warhammer: Vermintide II is the sequel to the critically acclaimed Vermintide. The time has arrived to revisit the fierce first-person co-op slaughter-fest featuring visceral and ground breaking melee action, set in the apocalyptic End Times of the war-ravaged Warhammer Fantasy Battles world .

Our 5 heroes have returned to take on an even greater threat – the combined forces of a malevolent and destructive Chaos army called the Rotbloods (devoted followers of Nurgle, the Chaos God of Pestilence) and the swarming Skaven horde of Clan Fester, who have returned with a vengeance. Prepare to be challenged like never before as you and your team desperately try to survive the never-ending onslaught. Choose between 15 different careers, climb the talent trees, customize your arsenal to fit your unique play style, fight your way through a myriad of stunning levels, and challenge yourself in our new Heroic Deeds System. The only thing standing between utter defeat and victory is you and your allies. If you fall - so will the Empire.

The game was released on March 8, 2018 for PC. PS4 and Xbox One versions will be released in a later date.

Fatshark followed with a similar game set in the Warhammer 40,000 universe, Warhammer 40000 Darktide.