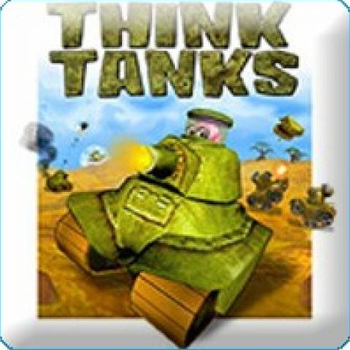 Picture a mix of World of Tanks and BattleZone. You've got ThinkTanks, developed by Bravetree Productions and published by Xbox Game Studios.
Advertisement:

First released in 2003 for PC and Xbox, the game featured a simple enough, arcade plot: You've been kidnapped by aliens, and fight your way out. By the way, you're a disembodied brain in a tank who is implied to be the brain of a soldier.

The main attraction of the game which has subsequently died down was multiplayer. The developer has since been absorbed into Garage Games and the game had a short F2P period from 2009 to 2010, before simply vanishing from the radar altogether, not even being available for purchase from the publisher's site (however, it can still be purchased from Shockwave.com for seven American dollars).