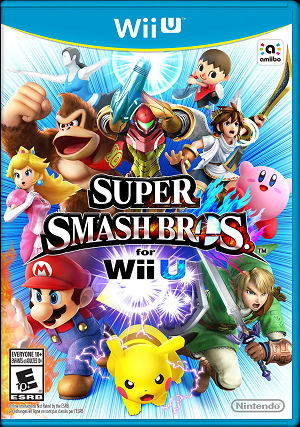 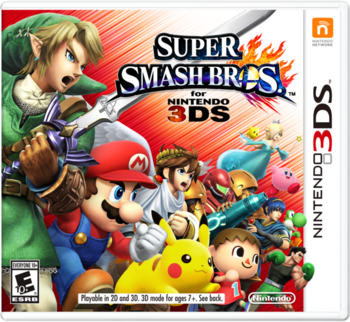 Super Smash Bros. for Nintendo 3DS and Super Smash Bros. for Wii U are a pair of video games developed by Bandai Namco and Sora Ltd. and published by Nintendo in 2014. As indicated by their titles, the games were released on the Nintendo 3DS and the Wii U, respectively. The two are considered collectively by fans to be the fourth installment in the Super Smash Bros. series (and thus often referred to by fans as Smash 4), though series director Masahiro Sakurai considers them separate enough to be the fourth and fifth entries, respectively. It contains 58 characters (7 of which are DLC), 42 stages for the 3DS version (8 DLC), 55 stages for the Wii U version (9 DLC), 700+ trophies, a bevy of new modes such as Target Blast (replacing Break the Targets) and Master Orders, and Character Customization in the form of Mii Fighters. Despite the obvious gaps in power between the 3DS and Wii U, the two versions play identically.

For 3DS, released on October 3 (September 13 in Japan), is the first game in the series for a portable console. While it lacks the recurring Event Match modes found in its brother, it makes up for it with the exclusive Smash Run and the StreetPass-based StreetSmash. Its selection of trophies and stages also largely focus on representing games from portable consoles.

For Wii U, released in late November of 2014 (early December in Japan), is much beefier than its sibling. It comes with extra features for the shared modes, several entirely new ones like Master Orders, the ability to have 8-Player Smash games, harder Challenges, and the board game-esque Smash Tour mode.

Like Brawl, For 3DS/Wii U has characters from third-party companies, with Sonic returning from Brawl, Mega Man and Pac-Man debuting in the initial release, and Ryu, Cloud, and Bayonetta as DLC.

The game is also the first to headline Nintendo's amiibo line of figurines, with every playable character getting a figure.

Note: Bold denotes unlockable characters. Italics denote unlockables in the 3DS version, but starters in the Wii U version.