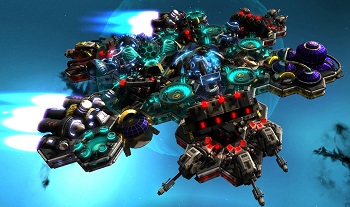 What the hex are they building spaceships out of these days?
Space Run

is a game by Passtech Games that combines elements of Tower Defense, Construction and Management, and Rail Shooter. All wrapped up in a package of Space Western and homages to The '80s sci-fi and Firefly.

Buck Mann is a down-on-his-luck Space Trucker. With his Robot Buddy Adaam-12 in tow, he makes dangerous delivery runs through Asteroid Thickets and Space Pirates for various corporations, both to pay off his gambling debts and regain his former fame as an Ace Pilot.

You start each run with a ship shaped out of hexagons, on which components can be built. After attaching your cargo and a few basic components, off you blast through 2-D Space. You do not control your ship, instead you must manage its defenses and collect resources from destroyed asteroids and enemies to build additional components. Do you add more thrusters to get a bonus for speedy delivery, or additional turrets or shielding to survive the trip? Often a run requires reconfiguring your ship several times on the fly.