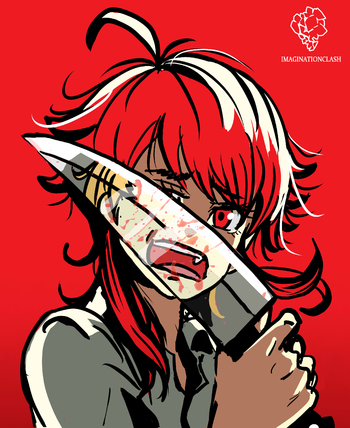 "Don't hide. Play with me..."
"The feeling of your blood on my hands! It's beautiful!"
— Saiko-chan, randomly after stabbing the player
Advertisement:

Saiko No Sutoka (“Psycho Stalker”, as translated from Japanese) is a survival horror game developed by habupain

, in which concerns a high-school student named Akira who must find a way to escape his school during nighttime, all while getting hunted down by the eponymous Saiko-chan, who has quite a bone to pick with him...

The first release of the alpha was on September 4, 2020, and the public release version is currently on Alpha v2.2.8, with Alpha v2.0.1 available for free. The game is currently still in development and the visuals are rather unpolished, but the unique mechanics of its antagonist has been the game's selling point. Rather than simply chasing the player on sight from A to B, the game opts for having Saiko be a much more intelligent and unpredictable pursuer. She will patiently hide behind walls/corners/doorways, kill off the lights in rooms and wait outside to ambush the player, knock them down when they have a key in their hands or when she's behind a closed door, stalk and silently follow right behind them, and cut them off if she can predict where they're going. All the while she'll tease, taunt, and laugh at the player in a cute and calm voice to really get under their skin.

It can be downloaded on itch.io here,

and on Steam here.

This alpha contains examples of: