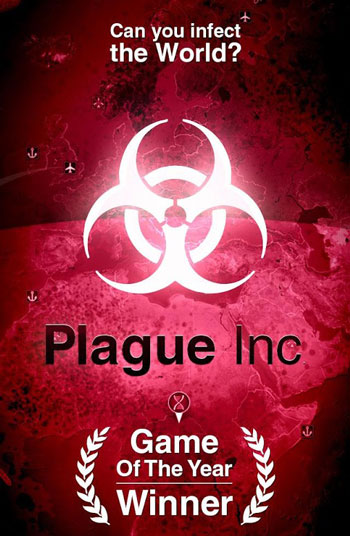 "This is what you guys get for not washing your hands!"
— Thinknoodles, "This Game GOT BANNED In China! | Plague Inc | Fan Choice FRIGHTday"

Plague Inc. is a real-time multi-platform strategy simulation game developed by Ndemic Creations. A Spiritual Successor to the web game Pandemic, the game was released in 2012 for iOS, Windows and Android, later being ported to the Microsoft Phone in 2015. A console version of the game titled Plague Inc: Evolved, including all of the original's expansion packs, was released between 2015 and 2016 for the Xbox One, Windows, Mac, Linux, and the PlayStation 4, later being ported to the Nintendo Switch in 2019.

Each game revolves around you creating a pathogen with an end goal of total annihilation of the human race by evolving a deadly, global plague whilst adapting against everything humanity can do to defend itself. After choosing your initial plague type, you are brought to the world map, where you freely pick your starting location.

, or the Android version here

A successful Kickstarter was launched for Plague Inc. The Board Game

On March 24, 2020, in response to a resurgence of popularity caused by COVID-19, the developers announced a new game mode called The Cure, which reverses the very premise of the game, and has the player work to save the world from a deadly disease. It was briefly teased

on Ndemic Creations' Youtube channel in October 20, 2020. The mode was officially released on November 10th for iOS and Android, with the PC version arriving January 29, 2021. The creators state that this mode will remain free until the COVID-19 pandemic is under control.

open/close all folders
#-D
E-K
L-P
R-S
T-Z
Tropes in The Cure
Remember that in real life, moving to Greenland or any other island nation will not make you immune to deadly pathogens, especially if that's the starting location.