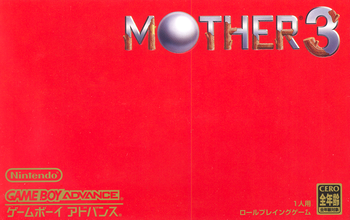 Mother 3 is the long-awaited sequel to EarthBound (1994) and the third (and final) entry in Shigesato Itoi's Mother franchise. Like prior games, the game contains weird and quirky writing and gameplay which features deft employment of Mood Whiplash in its artistic story, and centers on a young boy with psychic powers and his friends — but in this game, the time and setting are vastly different, and the threat to humanity is much more earthly than it was long ago.

Mother 3 is notable for its long development cycle (approximately the length of the already-long production of the previous title), having been planned almost immediately after Mother 2 was released. Details began to surface of Mother 3 as a Nintendo 64 title — as part of the now-failed Nintendo 64DD add-on — and was even given the tentative worldwide title EarthBound 64 before falling into vaporware territory (its earliest development predated Duke Nukem Forever's, which didn't surpass its time in Development Hell until 2007). It was officially cancelled in 2000, but eventually resurfaced in 2003 and was finally released for the Game Boy Advance in 2006 — apparently due to renewed interest while Mother 1+2 was being worked on. However, Nintendo has yet to release the game outside of Japan, despite vocal campaigns of support for an international release. Lucas eventually saw international recognition due to his inclusion in Super Smash Bros. Brawl.