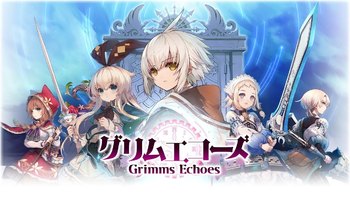 Echoes of fate
Grimms Echoes is a smartphone RPG in development by Square Enix, a spin-off of Grimms Notes, it is planned for a 2019 release.

The game centers on characters who once had stories. In the stories, beautiful princesses were bound to princes, and brave heroes fought evil kings. The stories restored happiness to unfortunate children. However, the characters committed sins and lost their stories. Familiar yet unknown echoes they hear in their hearts serve as guideposts toward the worlds of their lost stories. They atone for their sins in the only way they can in order to regain what was lost.

Unlike its predecessor this game features 3D characters and gameplay.