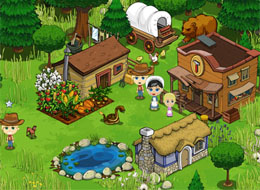 FarmVille FrontierVille was a Flash-based game by Zynga Inc., available through Facebook. You play a farmer, with a single farm homestead that consists of isometric tiles. You plow land, plant crops and trees, buy animals, and harvest them at regular intervals. You may also buy buildings, decorations, vehicles and various other items, many of which are cosmetic rather than functional. The primary currency is "coins", which are earned through harvesting, completing achievements ("ribbons"), and assisting your neighbors. There is also a secondary currency called "Farm Cash Horseshoes" which is primarily purchased with real money, and is necessary to buy most of the really good stuff. Through working on your farm homestead and buying items, you earn experience, which in turn unlocks better items as you gain levels.

The game promotes socializing and sharing. Your ability to expand your farm homestead is dependent on how many neighbors you have, so if you have Facebook friends who play FarmVille FrontierVille, you will probably be getting a lot of neighbor requests from them. Other than that, there are many items that can only be obtained by having someone send them to you as a gift, and you can earn extra coins and experience by visiting other farms frontiers and fertilizing their crops, pulling weeds or scaring off crows snakes, coyotes and bears.

The game supports many play styles. You can go for maximum coin earnings or maximum experience gain, become a collector, design your farm homestead around any theme you can imagine, or compete in the weekly contests for best-looking farm homestead. Play is allowed in any desired intervals, mainly through having a variety of crops that harvest at different rates, from two hours to five days.

It is a sister game to PetVille, FishVille and FarmVille. It was shut down by Zynga in 2015.