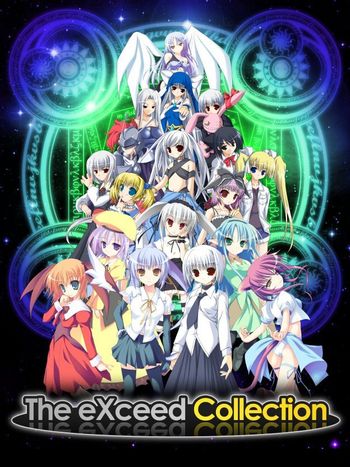 Long ago, in ancient times, there was a rebellion. An angel turned against God and rallied an army to wage war against heaven as they so often seem to do once they decide they no longer want to be part of the cool crowd. In any event, the angel and his demonic armies were sealed away with the help of humans who fought and died in a desperate war until finally an angel descended from heaven and granted power to a saint whose sacrifice made such a thing possible. Nevertheless, history was doomed to repeat itself and the fallen army eventually broke free over modern day Tokyo, bringing with them vampires, humans who bore the blood of the fallen angel. Opposing them was humanity's first and last line of defence, girls trained by the Inquisition who wielded powerful magic that could match the demonic commanders at the cost of most of their lifespan. They were likened to the bullets of a gun. Thus the stage was set for the first game by doujin circle FLAT, eXceed: Gun Bullet Children, and it was good. But not that good.

A sequel was released the following year called eXceed 2nd: VAMPIRE, which added a dual-polarity system similar to the one used in Ikaruga. Instead of the Gun Bullet Children, the protagonist was a vampire fighting for survival as power struggles within the Church left a faction that rejected any form of human hybrid in control of the Inquisition. After seizing control they initiated a worldwide purge and employed the Gun Bullet Children to hunt all vampires down.

Then FLAT stopped working on the eXceed series and eventually shut down in early 2009. In the meantime, ownership of the series was transferred to another doujin circle called Tennen-Sozai who threw out all the established story material and rebooted the franchise with eXceed 3rd: JADE PENETRATE. The third game tells the story of a young girl named Rayne Lindwurm (Rain Lindwurm in the Japanese version) who seeks to become the Demon King of her world. Standing in her way are many obstacles, including her own older sister and heiress to the power of dragons Celestia.

Iwakura Productions and Nyu Media have released Gun Bullet Children, Vampire REX and Jade Penetrate Black Package overseas on 29th March, 2012, for download at their website, Gamersgate, the Capcom Store, the Gamestop Digital Download Service (formerly Impulse) and Steam, with pending releases on Gametap and Gamefly. While the two latter games have English localization, Gun Bullet Children couldn't be localized since its code has been lost, so it has instead been released in its original Japanese with a translated script available from the distributors (and a fan made mod that uses said script to translate the game linked on the game's pcgamingwiki page here

). They are also available from Manga Gamer here

, as well as on the Humble Store.

Full Disclosure: The majority of this article was written without knowledge of Japanese and from guesswork using machine translation. As such, it may be is almost certainly missing important details or has gotten things wrong. If any helpful tropers come along and wish to assist with revising this article, data and resources can be found: