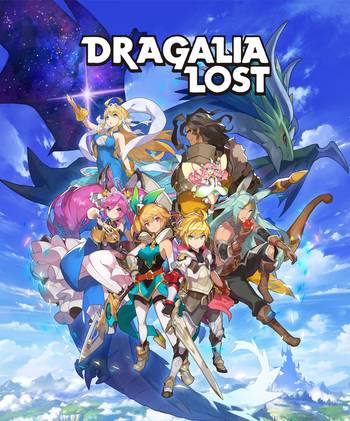 Dragalia Lost was a Free-to-Play Action RPG co-developed by Nintendo and Cygames released for Android and iOS on September 25th, 2018, for Hong Kong, Taiwan, Macau, Japan, and the US. It is Nintendo's first wholly original game for mobile.

Alberia is a kingdom dominated by dragons, with its royal family sworn to pacts with several dragons. Your player character is a prince who is seventh in line to the throne, but has long avoided forging a pact to avoid competition with his siblings. However, he is tasked with making a pact with a dragon as part of the mission to investigate the weakening of the Sacred Shard, their one defense against numerous hordes of monsters. But as he sets out, an unspeakable tragedy occurs and he is left to his own devices as he unravels what led to such an unfortunate disaster.

At least that's how it starts. And then it gets more wild from there.

Aside from the main game, Dragalia Lost has also branched into other types of media.