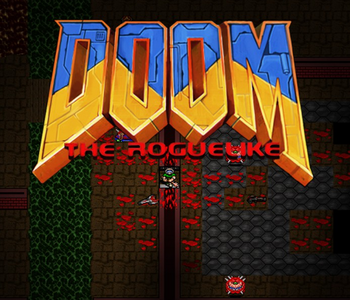 The result is a surprisingly effective translation of the Doom "feel" to a genre that is usually known for its slow, cerebral, and complicated gameplay. DoomRL, as it is known, is a relatively simple and fast-paced game, with an emphasis on ranged combat as opposed to most roguelikes' melee focus. The monsters paint the ground and walls red as you riddle them with bullets, dismember them with chainsaws, and pulverize them with shotguns. Rocket launchers and explosive barrels create flaming balls of death that destroy walls just as easily as they kill you and your enemies. Only a few levels into the game you will be turning hordes of zombies into red goo.

On February 28, 2012, version 0.9.9.6 was released, which marks some major updates to the game. DoomRL now has a full tileset by Derek Yu (you know, the Spelunky guy) that uses Doom-style graphics for everything (the original ASCII graphics are still available in Console mode), interface improvements, mouse support, and high quality audio upgrades to music and sound effects.

. In addition, there is a .wad for actual Doom that reasonably replicates the uniques and monsters to the FPS itself: DoomRL Arsenal

Kornel is working on a Spiritual Successor titled Jupiter Hell. It has a trailer on Youtube

. It has since been released as Early Access on both Steam and GOG.