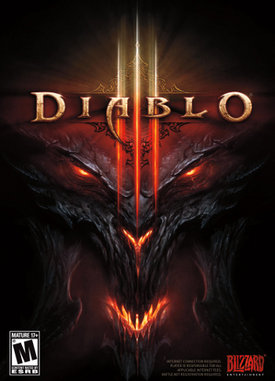 "Can you feel your death approaching?!"
The people pray for strength and guidance. They should pray for the mercy of a swift death, for I have seen what the darkness hides.
— Leah
Advertisement:

It has been twenty years since the demonic invasion was thwarted and the Worldstone destroyed, and Sanctuary has enjoyed relative peace and stability. However, hellish forces are stirring again. All over the world are reports of horrors and atrocities, and a fallen star landing in Tristram marks the beginning of the prophesied End Times.

Diablo III is the latest in the Diablo series, released on May 15, 2012. The gameplay is essentially the same as previous entries, but with more Anti-Frustration Features (such as gold being picked up on touch rather than having to be clicked), and with new trading aspects, including an auction house that was eventually removed for causing more problems than it solved. It also brings back the Barbarian character classnote but not the same Barbarian from Diablo II, and introduces four new classes: Monk, Witch Doctor, Wizard, and Demon Hunter.

A console version for the PlayStation 3 and Xbox 360 was released on September 3rd, 2013. This was followed with PlayStation 4 and Xbox One versions (including the Reaper of Souls expansion) in 2014, and a Nintendo Switch Eternal Collection version (with all the expansions, DLC, local wireless multiplayer, and exclusive content including a Ganondorf costume and Cucco pet) in 2018. The console versions allow offline play, don't have any Battle.net functionality (instead using the console platforms' online services). It will have amiibo functionality, with a Loot Goblin amiibo planned for release on December 2018.

The game was given an Expansion Pack, Reaper of Souls

, in March 2014. It introduced a new act, a new class (the Crusader), a new level cap, powers and more, and answered one of the biggest lingering questions about the storyline, namely what happened to the missing angel Malthael. It also introduced a form of New Game Plus called "Adventure Mode", where players can eschew replaying the story in exchange for having all the acts unlocked and hunting down bounties instead. The console version of Reaper of Souls was released as part of the Ultimate Evil Edition, which includes the original game, on August 19 2014 on Xbox 360, PlayStation 3, Xbox One and PlayStation 4.

You do believe me, don't you?