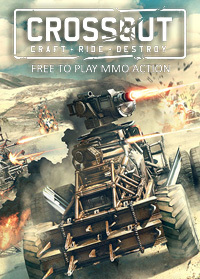 Short version of the backstory is that in 2021 a mysterious viral epidemic known as the ‘Crossout’ swept the planet, countries and populations simultaneously began to fall at an alarming rate all over the Earth. Those who did not die in the first few days, were plagued by hallucinations and headaches, many people went mad, others and committed suicide. The source of the disease could not be detected but the cities that were once the vibrant social and economic beacons of humanity were left ravaged and deserted.

Survivors gradually began to change — after fifteen years of transformation, the changes became visible. The most noticeable metamorphosis occurred in the eyes of the affected — some began to glow, while others resembled black holes. To hide their unnatural looks and conceal the mutation, people started wearing padded clothing and sunglasses.

Twenty years have passed after ‘Crossout’. Humans still remember their life before the disaster. As always, there are groups trying to recover the old world, while others enjoy the chaos and destruction. But there are those who are not human any more. They hide their faces behind masks, and their motives are unknown.

Of course, none of that matters to actual gameplay where there is no story content. Instead, the main focus is on player created and driven vehicles, which range from barely functioning The Alleged Car to a Spider Tank, armed with everything between machine guns and missiles and artillery pieces.