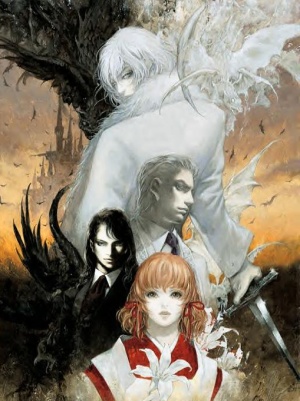 The Castlevania duology of Aria of Sorrow (GBA), released in 2003, and Dawn of Sorrow (DS), released in 2005. The duology takes place in 2035/2036, after the permanent defeat of Count Dracula. Both games follow a high school student, Soma Cruz, who has strange and dangerous magical powers.

Aria of Sorrow was included in the Compilation Rerelease Castlevania Advance Collection alongside Castlevania: Circle of the Moon, Castlevania: Harmony of Dissonance and Castlevania: Dracula X; released on September 23rd 2021 for Nintendo Switch, PlayStation 4, Xbox One and Steam.

In the year 2035, Soma Cruz is a seemingly Ordinary High-School Student (Foreign Exchange Student in the English version) who gets transported to Dracula's Castle (AKA Castlevania), thought to have been sealed permanently during the battle of 1999, during a solar eclipse, along with fellow student Mina Hakuba. Also at the scene is government agent Genya Arikado, who suggests that Soma venture further into the castle to discover the secret of its reappearance. Soma contains the Power of Dominance, which allows him to take the souls of his enemies and conform them to his will. It is revealed later that a mad cultist named Graham Jones is behind everything and believes himself to be the reincarnation of Dracula. Obviously, he has to be stopped.

The box, manual and introduction make no effort to hide Soma's status as Dracula's reincarnation. The game starts with Soma living a normal life with his not-girlfriend Mina when he is suddenly attacked by cult leader Celia, who wishes to create a new Dark Lord. After the fight, Soma charges into the cult's base with nothing but a rusty pocket knife and the clothes on his back. Oh, and he doesn't have any of the souls from Aria, having dumped them in the Chaotic Realm to reseal Castlevania and all. This time, the castle is somewhere in Europe and is made to be a similar substitute to the sealed Castlevania.

Aria of Sorrow and Dawn of Sorrow provide examples of: