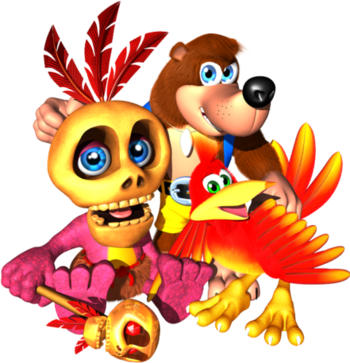 Banjo-Kazooie started development as a completely different game - an RPG for the Super Nintendo Entertainment System called Dream, which would have used the pre-rendered 3D graphical style of Banjo-Kazooie’s predecessor, the Donkey Kong Country trilogy. After years in Development Hell and a hearty dose of inspiration from Super Mario 64, Banjo-Kazooie debuted on the N64 on June 29, 1998. It was a critical and commercial success that cemented Rare’s place as a vital supporter of the console in its losing race against the PlayStation. Despite their close relationship however, Microsoft purchased Rare in September 2002, divorcing the Bear and Bird from Nintendo’s home consoles.

Banjo-Kazooie saw an Updated Re-release for the Xbox 360’s Xbox Live Arcade, developed by Rare and 4JStudios. This version is largely the same as the original gameplay-wise, but uses the additional processing power of the 360 to save which Notes and Jinjos you’ve collected in a stage so you don’t have to chase them all down again after dying or exiting the level. It also runs in HD in a 16:9 aspect ratio, uses high res UI elements, uses updated camera controls, and restores functionality to the previously abandoned Stop ‘n’ Swop system. This version of the game has since been released physically as part of Rare Replay, which can be played on both Xbox One and Xbox Series X.

In a Nintendo Direct on September 24, 2021, Nintendo announced that Banjo-Kazooie would be coming to Nintendo Switch as part of the Nintendo 64 Nintendo Switch Online Expansion Pack. This release is a straight port of the original N64 release, and the first time this version has been brought to modern consoles. It was added to the library on January 20, 2022.