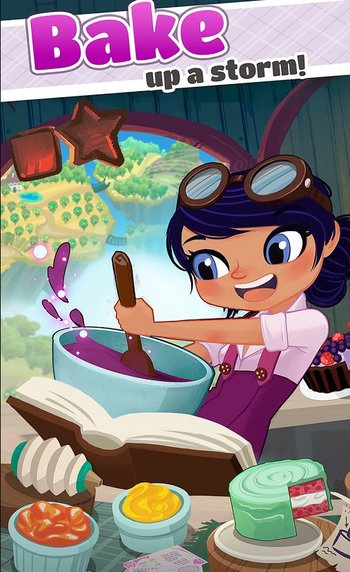 It's time to cook up a little magic!
Advertisement:

A Time Management Game from Rockyou Inc., Bakery Blitz follows the adventures of Sugar (the requisite plucky heroine), a baker who is determined to bring a little sweetness back to a world that's forgotten about dessert.

After discovering her Great Aunt Fondant's recipe book in the attic, protagonist Sugar creates one of the recipes and is instantly hooked on the taste. The prospective pastry chef sets off on a quest share her discovery with the world, only to discover that a certain Baroness von Bitter has caused everyone to forget what sweetness is. With a little help from the ghost of her Great Aunt Fondant, Sugar takes on the task of undoing Baroness von Bitter's evil magic - by opening a bakery!

Gameplay takes place in the kitchen of Sugar's mobile airship bakery. As customers arrive at the counter and place their orders (via pictograms in their speech bubbles), the player must navigate Sugar around the kitchen to operate stations dedicated to baking, filling, frosting, stacking, decorating and brewing a variety of confectionery treats and beverages. Cakes, tarts, cinnamon rolls, ice cream sandwiches, popcorn, coffee, tea — depending on the level, the menu of available desserts and complexity of the orders change. Customers arrive with a certain number of hearts, which diminish as they lose patience while waiting for their order to be filled. If their hearts run out, they leave in a huff. If Sugar can fulfill their order before their patience runs out, the happy customers leave coins (and occasionally power-ups) for Sugar to collect.

Sugar will have to be quick on her feet if she wants to keep her customers happy and her bakery open — and if she wants to stay one step ahead of Baroness von Bitter & her bitter melon minions.

(though the latter hasn't been updated since 2017).