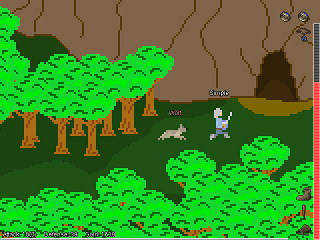 Aberoth is a Free-to-Play Java MMO with a Retraux 8-bit style, developed by Jarbit and released in 2015.

It is influenced by Ultima Online and old Sierra games, and aims for a similar level of difficulty. PvP can happen anywhere at any time. Death has experience and item penalties, and mobs will pick up and use your items against you when you drop them. Mobs, players, and dropped items are all clippable, and deaths are usually from being trapped in one way or another. Many people have spent weeks or months collecting rare items and then raged-quit after losing them. Historically the game has had a peaceful community, but there have been periods of war in which leaving town was dangerous. Things are currently peaceful for new players, especially if you are polite to other champions.