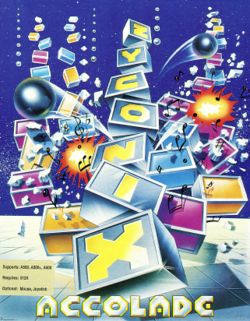 Zyconix is an arcade Puzzle Game, released in 1992 for Amiga and DOS. It takes the Columns principle (colored blocks rain down the field, aligning three or more bricks of the same color makes them disappear) and adds a few twists of its own:

Add a few special objects from bombs to drills to a breakout ball that you can actually deflect grabbing a brick as a paddle, mix with four play modes (normal, pre-filled playfield and two time trial variants), and the result is a fast-pasted, tricky test of agility.

Two players can compete in split-screen mode, where each removed line turns the corresponding number of bricks on the opponent’s field into indestructible obstacle blocks. Soloists adjust the difficulty level by tweaking the number of blocks in a line (from three to six), number of colors and frequency of new stones appearing.