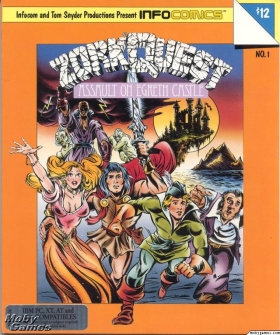 ZorkQuest: Assault on Egreth Castle is a game for the Commodore 64 and PC Booter and was released in 1988. It was published by Infocom, Inc. and developed by Tom Snyder Productions, Inc.

The Egreth Castle, once the royal abode of the proud king Duncanthrax, has now become a terrifying, haunted place. Trolls, hobgoblins, and night gaunts have turned the castle into their permanent residence. On top of that, an evil, insane, and powerful wizard is controlling everything that happens in and around the castle. A caravan of brave adventurers, guided by a magical amulet, reaches the castle. Will the heroes be able to overcome all obstacles and find a way to defeat the evil...?

ZorkQuest: Assault on Egreth Castle can be called an interactive comic book. The game consists of text accompanied by pictures, somewhat similar in visual style to comic books; the interaction is restricted to the player's choices that affect the storyline. The player is able to experience the story from the points of view of the several main heroes, witnessing their personal stories intertwining. Several playthroughs are necessary to experience the story in its entirety.