Video Game / Zombie Virus
aka: Zombies Vs The Ambulance 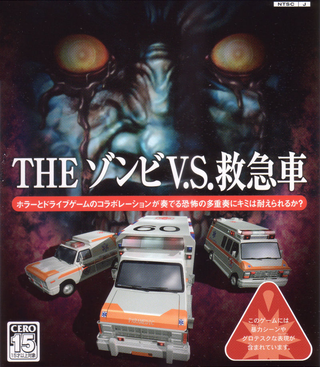 The Zombies vs. the Ambulance (also known as Zombie Virus in Europe) is a 2006 Horror game in that's Vol. 95 in a series of low budget Japanese PlayStation 2 games, the Simple 2000 Series, published by D3 Publisher.
Advertisement:

The city in which the game is set gets hit by an earthquake and the sky turns black. As a medical student and his female colleague experience this quake, they realize that people have now turned into zombies. Facing a Zombie Apocalypse, the pair decide to use their hospital's ambulance to pick up any survivors and bring them back to hospital. Looks like it's every zombie versus the ambulance.

You spend the majority of the game in said ambulance, and one of the appeals of the game is bashing through scores of zombies in the city's streets. Upgrades are available, including ones for speed, as well as getting larger ambulances. When a survivor is picked up, it's necessary to get them back to the hospital as soon as possible, or else they'll eventually turn into a zombie. The only time you're outside the vehicle is when you're in the hospital garage, either interacting with any survivors there or checking out possible upgrades.

Alternative Title(s): Zombies Vs The Ambulance