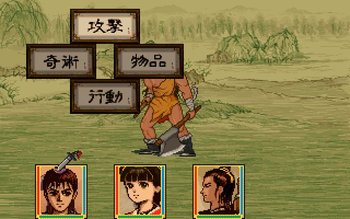 In the end of the first game, He Ran (何然), together with the Ranger Yang Kunshuo (楊坤碩), and the young sorceress Jiang Ruhong (江如虹), defeated the dreaded incarnation of the Flaming Phoenix (火鳳凰) who has kidnapped, spellbound, and enslaved Jiang, and traveled back in time to find He Ran's parents, as well as seeking the identity of the true leader of the Monsters, one who was being called the Wicked God(惡神).

Features: Although it is the second game, many key features of the game series started from this game. It was set in 320×240 256-colored screen (in the once-popular VGA X-mode). In-game artworks such as scenes, monsters, character portraits, items were fashioned in Chinese painting style.

Spirit Fusion Pot: Another key feature is the Pot system. Not long after the beginning of the game, the Pot of Evil-Refining was acquired, which has two functional ability:

1. Suck in whatever creatures encountered in battle, with limits:

2. Transmute power. A player can choose any two items, be it normal objects or such creatures, and transmute them to a new creature. The outcome creature may be a total rare and more powerful one that is impossible for play to caught in battle.

The Sword: In the battle against the final boss (the Pot Lord himself), the Crusader appears, and gives the Sword to the players. The manifestation of the Sword in this game is a weapon with the highest damage, and its slashing stroke is a huge tearing of lightning.