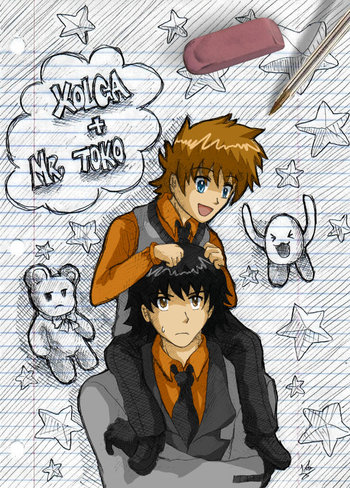 Xolga: Let’s get out of here.
Mr.Toko: Um, to where though?
Xolga: I don’t know. Take us to any world, any place, any time period. I bet that there are still a lot of worlds out there that we haven’t seen . . . And we’re still on an adventure, right?
Mr.Toko: . . . Yeah!

A series of games by Pacthesis

Xolga was spending a normal day in work when suddenly, the Agency gives him an assistant, a kid named Mr. Toko. Later they were sent to retrieve a pendant, which is actually an Artifact of Doom that turns Xolga into a stuffed bear and Mr.Toko as a flying egg. Desperate to turn back into humans, they go into an adventure and cross dimensions in chase of the pendant.

Now has the sequel

This game provides the following: