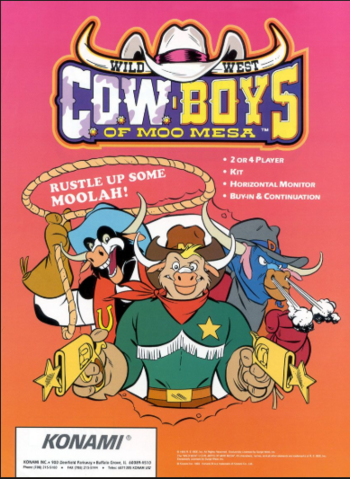 A Konami Shoot 'em Up licensed arcade game released in 1992, based on the namesake cartoon series.

The nefarious Masked Bull has escaped from jail and kidnapped Lily Bovine. Marshal Moo Montana and the C.O.W.boys spring into action, embarking on a mission spanning across locations in Moo Mesa to take on the Masked Bull's henchmen and rescue Lily.

In this game you can play as any of the four playable heroes: Marshal Moo Montana, Cowlorado Kid, Dakota Dude, and a fourth hero, Buffalo Bull.

The gameplay is similar to fellow Konami shooters Mystic Warriors and Sunset Riders which were released around the same time. Up to four players run through various colorful stages shooting down bad guys and blowing stuff up, before facing the boss at the end of the stage. From there, you can choose which stage you want to tackle next, all leading to the final showdown with the Masked Bull himself.

This Video Game Contains examples of: