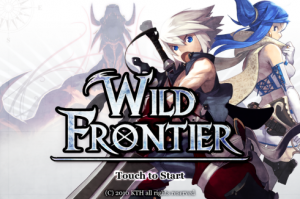 Chris and Lamia at the ready.

Wild Frontier is a 2011 iOS/Android Action RPG from Korean developer Allstar (known as KTH in the US). It tells the story of Chris Noah, a weak man who follows his girlfriend Lamia Cintare in search of a new continent. Chris, being the lazy slacker he is, falls asleep while he's supposed to be steering the ship. Because of this mishap, Lamia breaks up with Chris and leaves him with two other adventurers from the ship.

They crash into the continent of Armokar, a Patchwork Map inhabited by the dimunitive Mokars. Chris, distraught by his predicament, takes advice from fellow adventurer Roman and becomes an adventurer himself to win Lamia back. However, monsters have begun appearing on Armokar in large numbers, thrusting Chris and his companions into an epic adventure...

A sequel exists, but suffers from No Export for You.