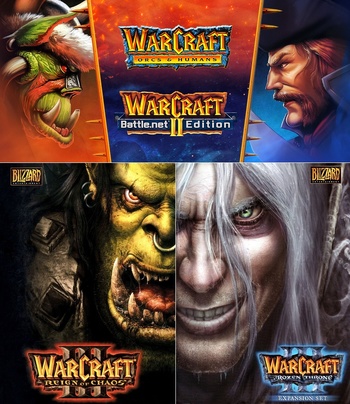 The success of Warcraft III eventually gave birth to World of Warcraft in 2004, which grows with a new expansion every two years on average. It shifted the Warcraft universe's storytelling from RTS to MMORPG, retconned some of the backstory developed by the previous games and continues the universe's story after the end of The Frozen Throne. It also created the Warcraft Expanded Universe. A feature film based on the story of Orcs and Humans and owing much of its Worldbuilding to World of Warcraft was released in June 2016.

Despite the shift to the MMO series, at Blizzcon 2018, it was announced that a long desired remake of Warcraft III was in the works. The remake, called Warcraft III: Reforged, was to be a—from the ground up—remaster of Warcraft III, complete with new models, voice overs, and redone cutscenes. The game was released in January 2020, but was severely stripped down due to an incredibly Troubled Production, and EULA goofs.note In an effort to avoid "the next DOTA" escaping them like Defense of the Ancients did, they inserted a clause claiming ownership of any user-created contents... Which in addition to sparking outrage, killed any will users may have to create maps.