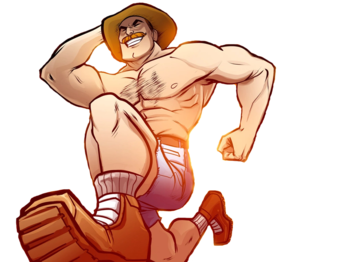 Vs Saxton Hale Mode is a fan-made game mode for Team Fortress 2, created by Dr. Eggman and the Random Fortress community.

Vs Saxton Hale pits the RED team against Saxton Hale, a single, player controlled enemy with the ability to One-Hit Kill and Super Jump. To compensate for this, most of the RED team's weapons are modified to be more powerful or versatile.

In addition, the base game mode features 3 other playable bosses (Vagineer, Christian Brutal Sniper, and the Easter Bunny). An extension of the game mode, titled Freak Fortress 2, has many more bosses to choose from as well as additional gameplay changes. These bosses can range from characters from Spongebob and The Matrix, to Metal Gear and The Legend of Zelda.

Vs Saxton Hale shows examples of: