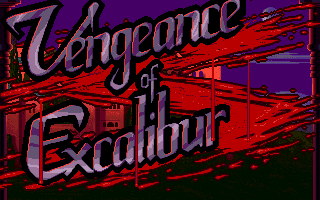 Vengeance of Excalibur is a 1991 Role-Playing Game developed by Synergistic Software and distributed by Virgin Games. It is a sequel for Synergistic's 1990 title Spirit of Excalibur, set in Spain around the turn of the 10th and 11th Centuries. Vengeance of Excalibur puts the player in control of a small team of "Knights of the Round Table" who will seek out in Spain for the stolen items of the treasure of Camelot (the series advances the timeline of Arthurian lore 500 years past period where it is usually established).

The game begins two years after Spirit of Excalibur left off: Britain has been reunited under King Constantine III, who succeeds King Arthur after the Battle of Camlann, and peacefully rules over the realm after killing Mordred's sons and their aunt, Morgan le Fay. During a stormy night a lone knight is admitted into Camelot; while Constantine converses with the stranger, the knight lets in a second figure, who subsequently transforms Constantine into a statue. They then proceed to the treasure room of the castle and steal its contents, including Arthur's mythical sword Excalibur and the recently recovered Holy Grail. The knight is also able to subdue and kidnap Nineve, the court's sorceress, second in magical power only to Merlin. With the treasures of Camelot stolen, plagues and demonic creatures roam the British country-side. Merlin is appointed acting regent of the realm while the Knights of the Round Table are dispatched in small groups to search the medieval western Europe and find a way to stop this mystic assault.

The player controls a group of knights bound for the Iberian peninsula from Portsmouth: a witness to the assault on Camelot reveals that the knight is the rogue warrior Sir Bruce sans Pitie, and that there is evidence that indicates that he may have traveled to Spain, a country torn by the war between the Christian kingdoms of the north and the Muslim caliphates of the south, and plagued by groups of mercenary knights, violent bandits, and clannish Basques. If they manage to negotiate these hazards, the forces of the Round Table must still find and defeat Sir Bruce and his ally, the Shadow Master.