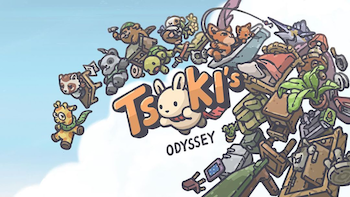 Tsuki's Odyssey is a mobile game developed by RapBot Studios and released for iOS and Android by HyperBeard in 2021.note April for Android and September for iOS It serves as a spiritual successor (and a soft reboot) to Tsuki Adventure.

It shares a similar premise with its predecessor: a rabbit named Tsuki, having grown dissatisfied with his paper-pushing office job, abandons his life in the city and moves back to his quiet hometown of Mushroom Village, taking over his late grandfather's carrot farm. As in the first game, the player does not have direct control over what Tsuki does. Instead, the game revolves around checking in on him periodically and seeing what he gets up to on his own. The player can move Tsuki around with the world map, buy items and furniture, interact with the other residents of Mushroom Village, and enjoy hobbies like fishing.